Today’s daily email message from tut.com arrived in my Inbox  and reading it made me think back to Tuesday, September 17th, the last water adventure for me until next summer (that I know of) – and what an adventure it was!

One of life’s most elusive lessons, Joyce, saved for only the wise and peculiar, is that there’s nothing, ever, to be unhappy about.

Unless, of course, you lose sight of the big picture, think the illusions are real, or forget there’s no such place as far away.

From a higher perspective, there really is nothing ever to be unhappy about. But in the course of being in a human body, the ego sure can make one feel unhappy and many other unpleasant feelings. But I think my adventure of that September day demonstrated to me that I’m getting it, getting that Life happens and we get to choose how we show up, as a “happy” camper or an “unhappy” one. It seems I’m choosing to show up as the former more and more. I am grateful.

So why did Tuesday, September 17th come to mind? 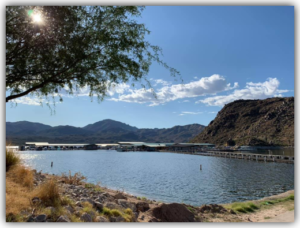 Four of us had rented a pontoon for the day from the Bartlett Lake Marina (AZ), the 5th time we’ve done so over the years. This time was a bit different though in that it was a weekday and after Labor Day. We were delighted to see very few folks partying and camping along the shoreline or on the lake making noise with their speedboats and jet skis; all was peaceful, serene, and quiet. Well, if you know the parable of the Chinese farmer — when those around him would judge an incident as “good” or “bad”, he’d say “Maybe so. Maybe not. We’ll see.” – how true it proved during the course of our day!

We did our usual tour around the lake, then swam in one of the inlets, all the while spying eagles and herons, and soaking in the beauty of the lake, rock formations, and saguaros. It felt like  our own private lake, undisturbed by other people, delighting us all.  “Maybe so. Maybe not. We’ll see.” After lunch, we headed to an area we’d always gone to before… 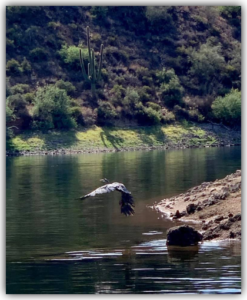 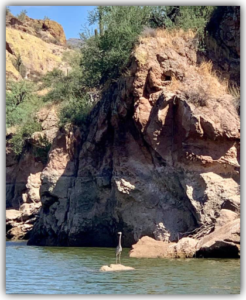 The very short story is that the boat scraped some rocks that were not visible, we got out to push it to a deeper area, and then, upon getting back in, the engine ignition switch was loose and we couldn’t get it to work. We pushed and pulled the pontoon with ropes tied around 2 of the gals’ (envision “The African Queen” or “Six Days, Seven Nights”) s-l-o-w-l-y trying to reach a spot where we could get cell phone service or get the attention of some human beings. No luck with either. So much for being on our own private lake!

After spending three hours at this exhausting effort in the heat and sun, and making little headway traveling down the lake (we were still about four miles from the marina)  or being able to communicate with anyone, we decided we had to give it up. It was 4:00 p.m. and the boat was due back by 5:00 p.m. We were pretty sure that when we didn’t show up by 5:30 p.m. or so, a rescue party would be sent out. It was just a matter of time and we needed to just wait it out, to practice patience. 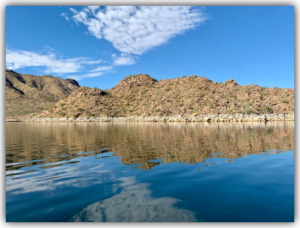 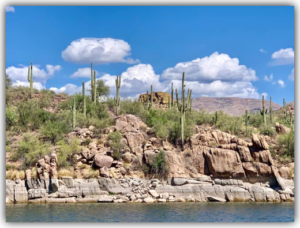 The hours passed, with the sun setting and the stars coming out, and we kept our spirits and humor intact, mostly. Of course, we thought, it was always possible that we wouldn’t get rescued until the morning. That didn’t sit well with some of the women, but it was fine with me. I’d never slept outside, overnight on a boat, and here was an opportunity and one far less expensive than renting a houseboat on Lake Powell, which we’d discussed earlier in the day.

In fact, I was fine with the whole situation: we were in nature; we were anchored in calm waters; the weather was perfect; we had sufficient drinking water and some food; all of us were physically okay; and, we were not alone, we had one another and Spirit. I was sure Spirit had a reason as to why this outing was unfolding the way it was. I chose to show up as a “happy” camper, to make lemons into lemonade. And, ya know, it seems it just came naturally too. I was so grateful.

Well, I didn’t get to sleep topside as we were rescued about 8:00 p.m. The marina owner came on board our boat and we told him what had happened. He checked the ignition switch, tightened the nut just as our captain had done multiple times, and without hesitation, the key turned and the engine ignited. We four gals looked at one another, dumbfounded. Yes, it was clear that Spirit had had a reason for the four of us to be together and share this adventure (although the reasons were different for each of us, I’m sure). Our private captain steered us back to the marina while we got to relax and to enjoy a beautiful, starry night sky.

Yes, the day didn’t turn out as we’d expected, we were inconvenienced, and arrived home very late. Due to the inability to communicate, the ending could have been far worse if one of us had had a health emergency. But we were safe and very grateful for the many blessings that accompanied us throughout the day. We had a great story to tell too!

What adventures did you have this summer?